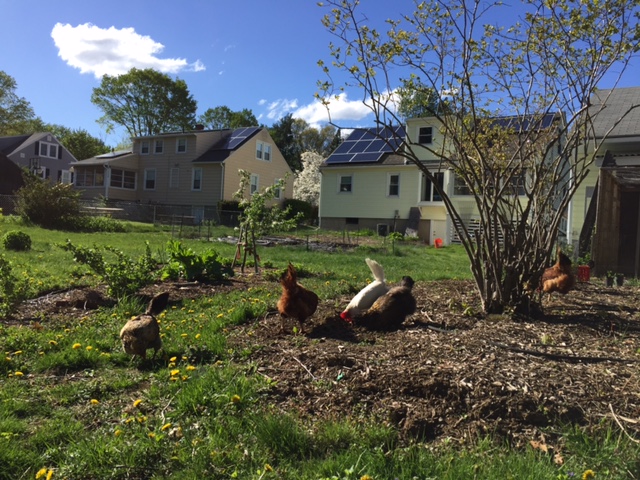 Just a quick update for those new chicken moms!

It’s important to do a deep clean of the coop at least twice a year. So in order to keep track my suggestion is to clean in the spring and fall. In the spring make sure to scrape the walls, clean the cobwebs, add new fly paper (if using) and scrub the poop trays (if using). This makes sure that there isn’t any transfer of diseases or bugs or anything unsavory.  In the Fall make sure to do the same (not necessarily the fly paper, depends on how bad your flies are, ours are the worst during the summer) along with adding extra bedding for added warmth for the winter. 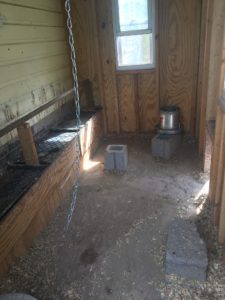 Cleanest it’s been since it was built!

This Spring cleaning we let the chickens out of the coop and run for the first time. We made sure to do it around 3/4pm so it was closer to dusk in the hopes that they would put themselves away. I was a little nervous, not going to lie, first because I know that there is a hawk that likes to circle the area and second because we don’t have a fenced in backyard and I could just see me trying to corral a chicken from across our semi-busy street (queue all the chicken crossing the road jokes) at our neighbors house. We made sure to be out during the whole time and kept an eye on them just in case. Most of them stayed in the area except Baldy (see her post here) she strayed pretty far away so I had to corral her several times. 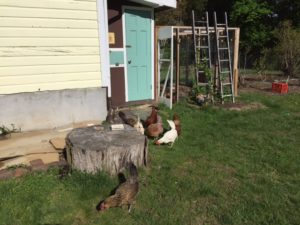 They also met their big brother Ziggy for the first time and their was mutual indifference. He is a herding dog so we half expected him to try and herd them back in to the coop but nope! Nothing! I think he enjoyed eating their poop and other gross things in the dirt.

Here’s a video of Ziggy meeting his feathery sisters face to face for the first time!

We weeded, they pooped, Ziggy ate things he shouldn’t…it was a lovely weekend!