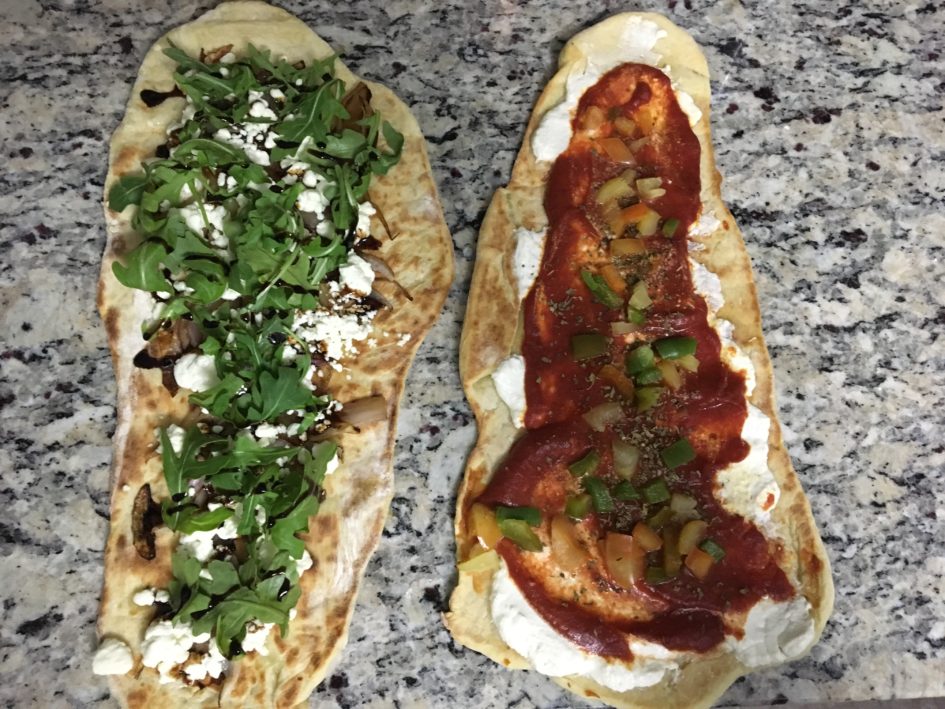 In a pinch I always make Na’an.

We had Jim’s parents over for dinner recently and I was planning to have eggplant hamburgers and last minute I realized we didn’t have hamburger buns so I made Na’an wraps to use instead.

We were running low on pretty much everything in the fridge and pantry so I tossed some drained canned garbanzo beans in olive oil and curry seasoning, baked them at 400 for about 15-20 minutes (until browned), spread some Taziki spread on some fresh made Na’an, added some carrot ribbons and boom, dinner! Much like our previously posted recipe here.

So again on another running low- just go home from work- need to clean out the fridge-kind of night I decided to whip up some pizza. But didn’t want to wait for the pizza dough to rise and didn’t feel like doing lots of kneading.

I used our previously posted Na’an recipe and made two large slabs of Na’an (slabs is the right word there right?)

Preheating the oven to 350, I caramelized some onion, tossing two crushed cloves of garlic in at the end and spread them over one piece of Na’an, I added goat cheese and laid it out on a baking sheet. For the other piece I crushed two more cloves of garlic into some ricotta and spread that on the Na’an, covering it in some homemade Marinara sauce and sprinkling it with some frozen chopped peppers from the garden.

I baked them for about ten minutes and took them out. I spread some arugula over the goat cheese piece and then drizzled the whole pizza with balsamic glaze.

Nothing against our yummy peppers but the arugula one was my favorite!