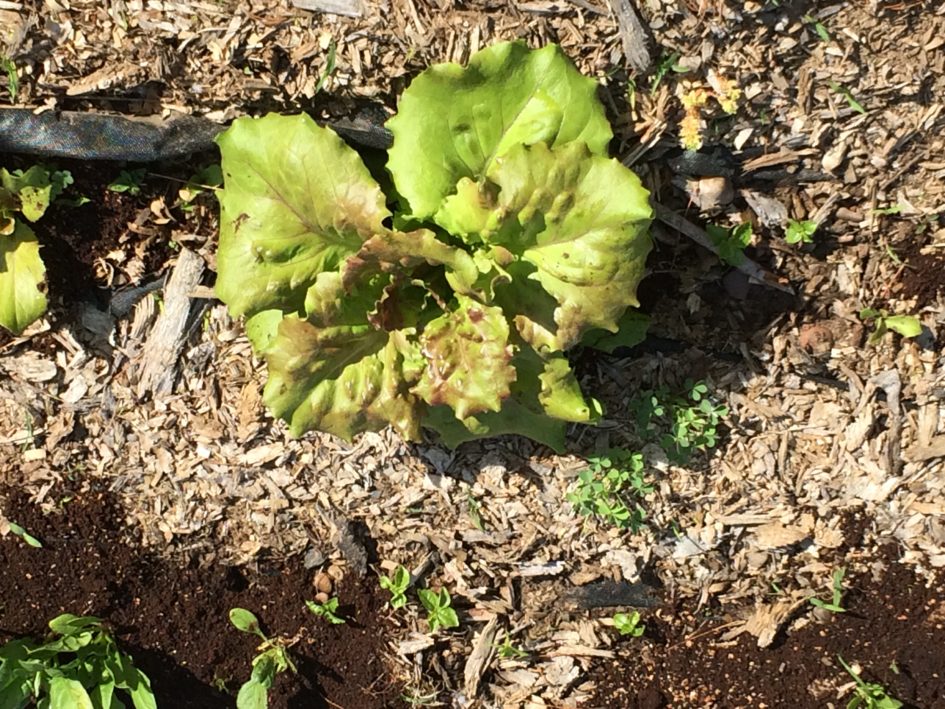 Prepping a garden is not easy. To many it seems like Blueberry Hill just popped out of nowhere. Jim’s brief account of the origin while informative didn’t really get you into the action.

He left out the fact that it had rained the night before, so dirt was mud, anything that resembled dirt was mud and even the mud was muddy. It also rained on and off that day. Passing drizzles aren’t bad in general and definitely not bad when transplanting but when you’re covered head to toe in mud, dried mud, what used to be mud and formally dirt (aka mud) a passing shower just aids in dispersing said mud. He also left out that the process of getting the trees off the bed of the truck involved me laying on my back in (you guess it) mud and pushing the bush off with my legs while pushing with my arms against the back of the truck. I had dirt in places dirt should never be. On top of using pretty much all the strength I could muster getting the bushes of the truck I also had to work on making the holes larger and burying the bushes while Jim drove the truck back to the farm to retrieve more bushes. At some point I did indeed curl up on Stump and wish for sleep. I also at some point had to make a quick caffeine run at our local Starbucks…mud and all, the poor suburbanites were aghast. 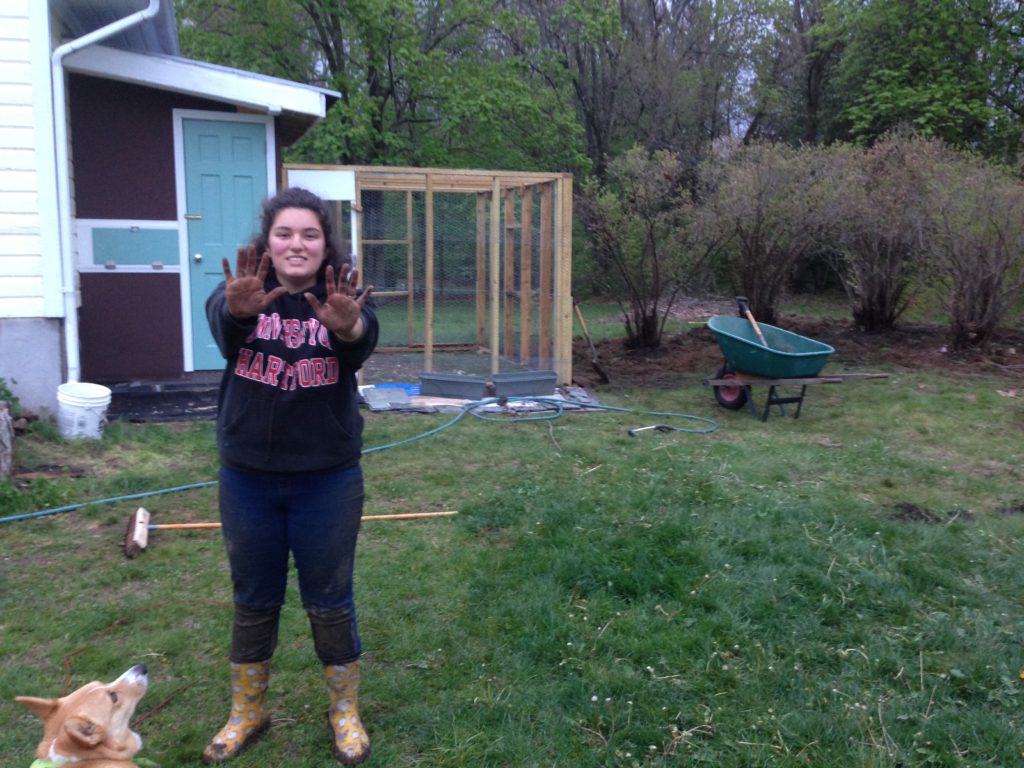 Don’t let the smile fool you, I was thinking about a shower and bed. Even Ziggy was appalled.

But this post isn’t about my hardships, no, it’s about specifically the mud. Not because it was all over me but the fact that I was covered in some grade A mud. Let me explain…

When we plopped those brand new to us yet 60 year old blueberry bushes into our probably too undersized holes I was shocked at how different the soils looked. Ashamed and embarrassed actually. Becky and Dan’s dirt surrounding the blueberries was a rich dark chocolaty color. Ours was a cheap brand milk chocolate color. Now why use those metaphors, because the last thing I want to do is think of dirt every time I eat a square of our favorite dark chocolate. Because the dirt is what your plants “eat”. It’s actually what the organisms and worms around your plants eat and poop out but the nutrients within it are what those spindly roots absorb and use towards growth and expansion. 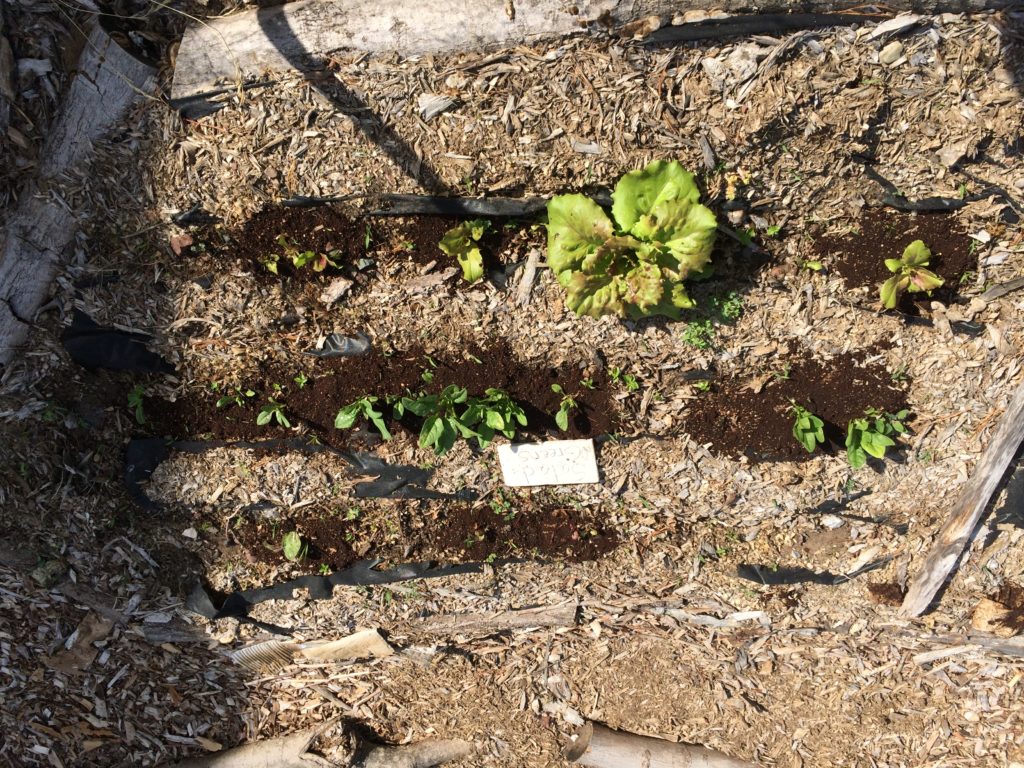 Our not-amended salad greens bed is patchy to say the least.

We happen to have an excellent example of this in our annuals garden. We have two beds we did not amend or add to. We did very little to prep, other than pull some weeds. We used the same black plastic that was there from last year and planted into the very same soil. One bed has carrots and salad greens, the other bed is half snow peas and beans. The rest of the beds and specifically the third bed next to the half bed we put some work into. We acquired three truck loads full of aged manure from Becky and Dan and built the beds up. We then took a pitchfork and aerated the beds, then we added Tomato-Tone, an organic Tomato and Vegetable fertilizer and crushed egg shells and worked them into the soil with a rake, we then covered it with black plastic and cut specific areas for the soon to be plants. Side by side we have beans, one planted in non-amended, un-worked soil and the other in aged manure and fertilizers. 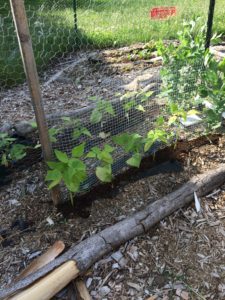 They are a bit leggy and very sickly looking. 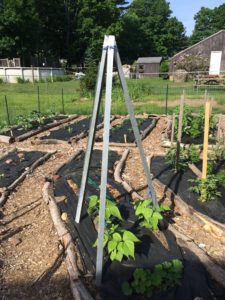 These have nice full leaves and are a bright, lucious green.

See the different? It’s scary, and also very telling. Becky and Dan certainly didn’t add aged manure and fertilizers to their Blueberry bushes but they did what most people can’t even fathom, they didn’t maintain. They don’t have a monochromatic perfectly spaced and colored lawn so the upkeep is a couple of mowings a season. They most certainly aren’t going to take the time to rake up all the leaves and put them in their compost, they let them be. In the fall the uneaten blueberries and dead or dying leaves fall the ground beneath them and decompose right into the soil that they came from. Its the most natural of all the cycles.

Our backyard used to be a lawn, and pretty regularly maintained, mowed, raked and kept up. The soil can’t help it. It is what it is. The difference though is just so shocking. So our goal this year and years beyond is always going to be building the soil. Doing whatever we can to return the nutrients back to the soil for the next generations to come. 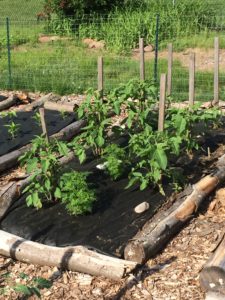 Our tomatoes and marigolds in our aged manure and fertilizer beds are flourishing.

When we were shopping for mulch the woman at the desk said that the kind we were looking at would break down fast but there were others that last longer but we were sold. Break down means soil building to us. We’ve kept and crushed all our egg shells and I’ve been getting coffee grounds from our local Starbucks. I’ve been mixing the two together and making a sort of mulch to put around our plants, that too will break down and the calcium of the eggs will go into the soil and eventually the coffee ground will add nitrogen to the soil, in the short term they attract earthworms who leave a trail of some pretty grade A poop in their trail.