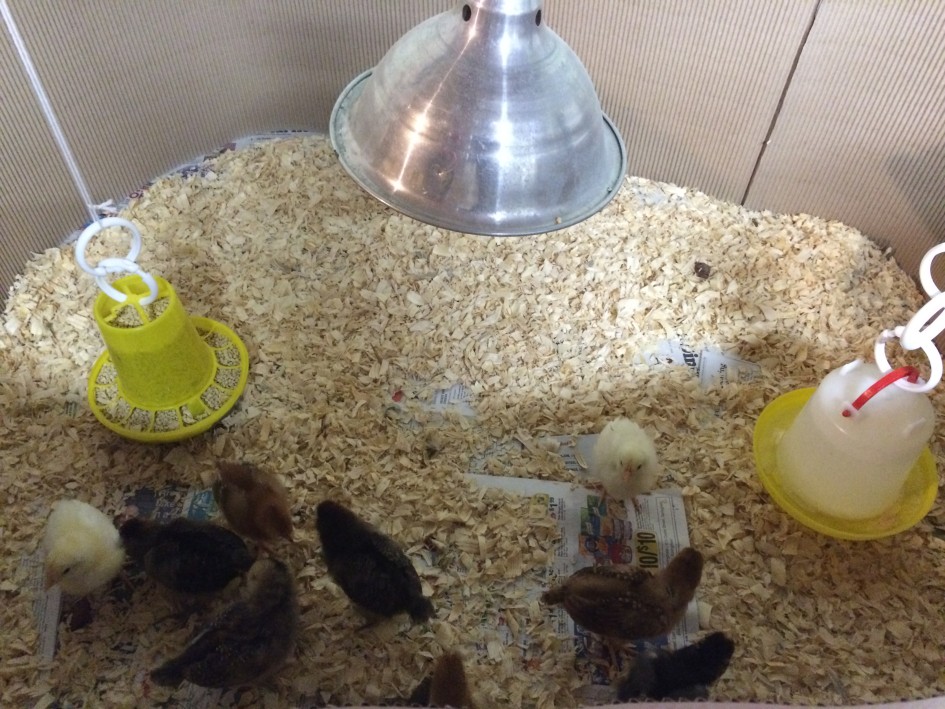 The girls are growing so fast! And “girls” might be incorrect. I have a sneaking suspicion that we have a rooster in our mix. Omelet, who we have reported on before might not be who we thought she is. According to Becky, our local chicken expert, Omelet’s behaviors might be indications that she is a rooster. Omelet always runs towards the hand that enters the pen, “she” explores the most, jumping/flying high so as to see over the top of the pen. While I thought Omelet was just being friendly she was probably being protective of the rest of the flock.  I have read that without a rooster sometimes the head hen will take on rooster-like qualities. But I would think that would manifest later on in development so odds are that Omelet’s new name is Chicken Parm. 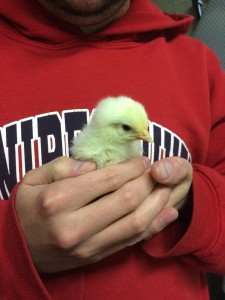 Hen or Rooster? We’ll find out in 4 months!

We’ve already had to upgrade the living situation. They outgrew their plastic tote pretty fast. One day I was hanging out downstairs talking to our cabinet guy about the delivery of our counters and I turn around to find  Chicken Parm teetering on the edge of the tote! As a temporary solution we put the corrugated cardboard corral that came with the chicken starter kit around the tote to make the sides higher. Almost instantaneously Chicken Parm found out  he could hop from the side of the plastic tote to the top of the cardboard. I don’t think any chick would purposely hop off the edge due to a pretty high sense of self preservation, but we did worry that in exploration sake one would misstep and fall off. Most have their wings and much stronger legs but are still not the most graceful. 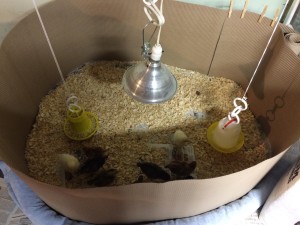 So over the weekend we  cleared the spot in the basement under the table they were on, laid down a tarp, covered it in newspaper and shavings, rigged up the lamp and then added the chicks. We rigged up a very fancy way to hang the water and food which even with all the hassle to get it hung was 100% worth it. The biggest hurdle with hanging the water and food was a) we only had yarn and b) once hung they spun and swung back and forth like crazy! We ended up taping some sponges under the food and balancing the water on top of another sponge. Both have to be full to be heavy enough to let the sponges stop them from spinning but that’s OK as long as we have enough food.

Speaking of food, we are on our second 5 pound bag of chicken starter. I think hanging the food will definitely make the next bag last longer. Before when it was on the ground they would scratch and kick it out of the feeder so it would be all over the floor of the tote and then covered in shavings and well, poop. Not the most desirable. I’ve also given them a couple different “real” foods like finely chopped chives, cilantro stems, cabbage, oats and bread. I’m sure they get enough nutrients and food from the chicken starter but I wanted them to have some fresh foods and to be entertained. I sprinkle the chopped up food around their pen so they have to exercise their natural tendency to scratch and dig which gets them moving. The chick grit says to add it into their food by week two so I’ve started that as well. Grit is finely broken rocks and sand that the chickens  purposely swallow to fill their gizzards. Whenever they eat something it goes through their gizzards first where the stored rocks and sand grinds the food up before it moves to their stomach. 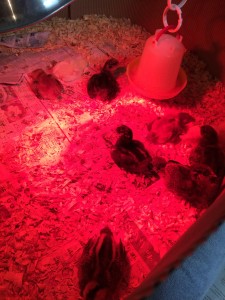 Naptime in the red light district

I do find them relaxed and sleeping often but once you’re down their making noise they are up and about. They “fly” from one end to another, and they are getting some height!

Stay tuned for our next update.