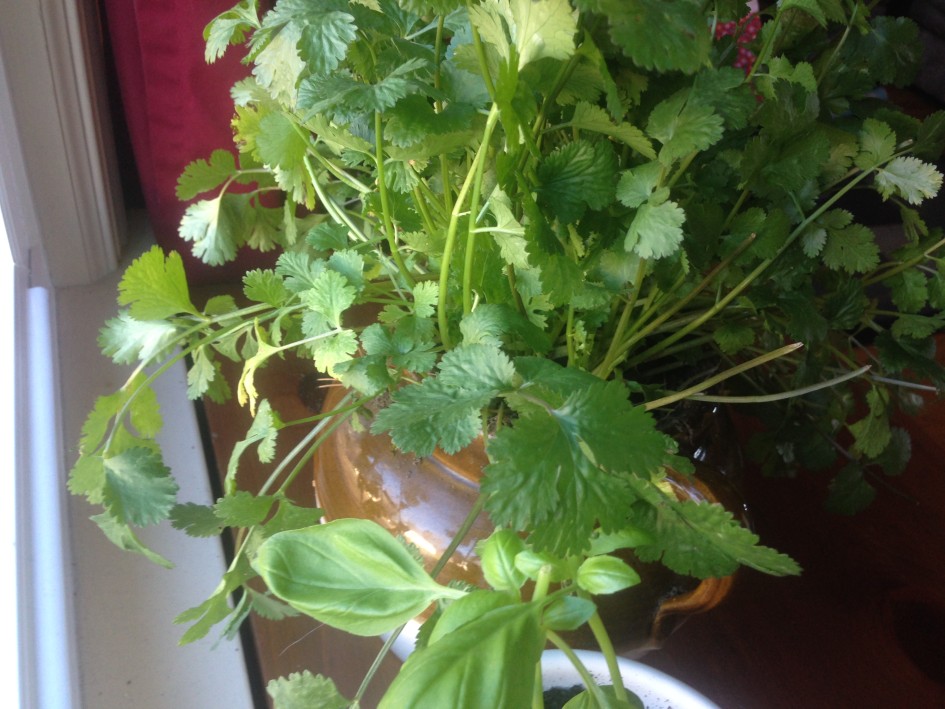 This is another recipe from warmer months. But it’s still incredible and if you’re like us, your cilantro is still hanging on. I hate recipes that have leftover ingredients you don’t know what to do with and hang around till you eventually have to throw them out. Sometimes you just can’t avoid it, the way things are packaged and the prices force you into having to make an exception. We had leftover shrimp so I wanted to find a yummy recipe that would use it up. I adapted this recipe from a great dish from the Mediterranean Dish blog from which I was inspired. This recipe calls for a small amount of white wine, which if you’re not a white wine fan seems wasteful. Try buying those small bottles they have at package stores and find another recipe for later in the week that calls for a bit of white wine in the recipe. The white wine for cooking in grocery stores has a high salt content and is made to last a while, so avoid that! If you are, then have the white wine with dinner, Pinot Grigio worked well for us, but I’m sure a Sauvignon Blanc would taste excellent too.

It was wicked hot the day I chose to make this so I decided to adapt it to make it an only grill recipe so I didn’t heat up the whole house. Jim was kind enough to drag out the grill and I (the big girl that I am) figured out how to start it up all on my own. We have an overabundance of cilantro so I might have gone a bit crazy with the cilantro, I really need to remember to cut slowly and measure out as I go along.

Quotes from the Farmer

Cilantro is very leafy when you buy it as a seedling from the nursery. What I haven’t quite figured out yet is how to maintain the thick leaf growth, so be careful. The plant quickly turns into long stems and diminishing leaves that open into nice white flowers. White pretty to look at the plants quickly stop producing the cilantro leaves. A month or so after purchase we’re almost out of leaves (partly because Jenny tends to prefer Cilantro in just about EVERYTHING!). What may work best is to successively plant every 2-3 weeks so each plant will be in a successive stage throughout the season.

After a few months of observation the cilantro is doing a lot better in the cold weather. It’s still good outside into mid December and has withstood some really hard frosts. We transplanted it inside on December 12 and hope we can keep it around indoors for a few months.

1 tbl chopped cilantro (fresh from the garden if possible)

1 tbl dry white wine – save the rest to have with dinner!

Measure out the brown rice and cook per the directions on the package. This should take about 40-45 minutes so should be ready in time!

Remove the shrimp from the freezer

Slice the top off the garlic head off, no need to peel it and drizzle it with the 1-2 tbls of EVOO. Wrap the whole head of garlic in foil and roast on the preheated grill for 10-15 minutes until fragrant . Let it cool (or be impatient like me and try and peel it while its hot and burn yourself) and peel and crush the garlic as thoroughly as possible, it’s really neat how the cloves of garlic should pop right out, another win for roasted garlic! Personally, peeling garlic is one of my least favorite things to do, just under cutting onions.

Wrap the shrimp in a double layer of foil leaving a small gap for steam to escape. Put on the grill and let heat.

Combine and whisk the smooshed garlic with the cilantro, lime juice, white wine, EVOO and red pepper flakes (Jim doesn’t like spicy things so I usually leave these out, but in my opinion it doesn’t add too much spicy, just a bit of warmth).

If the shrimp is done, take off the grill, if its pink and firm toss in the sauce, if it’s not then cook it until it is.  Fluff the rice if it’s done and stir in the tablespoon of cilantro. Serve the shrimp over the rice and eat! Make sure to pour the rest of the sauce over the rice and shrimp. The rice will absorb it perfectly.